Between 2007 and 2010, the share of children and working-age adults in the United States with employer-sponsored health insurance dropped 10 percentage points from 63.6 percent to 53.5 percent, according to a new national study by the Center for Studying Health System Change (HSC). The key factor driving the sharp decline was the enormous loss of employment during the Great Recession, which officially started in December 2007 and ended in June 2009. The proportion of the population younger than 65 with no workers in the family spiked 10 percentage points between 2007 and 2010, from 21.6 percent to 31.6 percent. The decline in employer coverage disproportionately affected young adults, people with a high school education or less, and people employed in small firms.

Even when employment rebounds to pre-recession levels, a return to previous levels of employer-sponsored health insurance is unlikely. Well before the start of the recession, a steady decline of employer health coverage was underway with fewer firms offering coverage and fewer workers taking up coverage—likely because of rising health care costs. Both of these trends continued during the recession and contributed to the decline in employer coverage between 2007 and 2010. The core threat to employer health coverage is health care costs increasing faster than wages, which makes employer coverage unaffordable for a larger share of the workforce, particularly low-wage workers. For example, among children and working-age adults with incomes below 200 percent of poverty—$44,100 for a family of four in 2010—the proportion with employer coverage dropped from 42 percent in 2001 to 24 percent in 2010.
Many people who lost employer coverage during 2007-2010 obtained public health coverage. National health reform, with its major expansion of Medicaid and new subsidies to purchase nongroup insurance, will further extend coverage to the growing ranks of Americans without employer health coverage.

Since World War II, employer-sponsored group health insurance has been the leading source of coverage for U.S. children and working-age adults. Fringe benefits, such as health insurance, are a key way employers attract and retain workers. There are significant advantages to obtaining health coverage through an employer rather than purchasing coverage in the nongroup, or individual, insurance market. Administrative costs are much lower for employer coverage, particularly in large firms, and employees enjoy tax benefits because compensation in the form of health coverage is not treated as taxable income. And, if a firm offers coverage, workers generally cannot be excluded or charged more based on a history of poor health.

In 2007, close to two of three people younger than 65 were enrolled in employer-sponsored insurance. By 2010, that share had fallen to slightly more than half, a decline of 10 percentage points, according to HSC’s nationally representative 2010 Health Tracking Household Survey (see Data Source and Figure 1). The sharp drop in employer coverage reflects a rapid acceleration of a long-term decline in employer health coverage—except for a small uptick in the late 1990s, when the economy grew at an unusually fast rate.1

Employer health coverage has become unaffordable for a growing share of the population, especially for low-income families, or those with incomes below 200 percent of the federal poverty level—$44,100 for a family of four in 2010 (see Figure 2). Between 2001 and 2010, the proportion of low-income nonelderly people with employer coverage dropped from 42 percent to 24 percent. Among middle-income people—200 to 400 percent of poverty—and higher-income people—above 400 percent of poverty—employer coverage held more or less steady until 2007 and then dropped sharply, suggesting affordability problems are spreading up the income ladder.

The chronic health care affordability problem and the more recent loss of employment have had a compound effect on the decline in employer health coverage. Within each income group, employer-sponsored insurance has declined, and the recession shifted significant shares of the population from the higher-income/higher-employer-coverage groups into the lower-income/lower-employer-coverage groups. 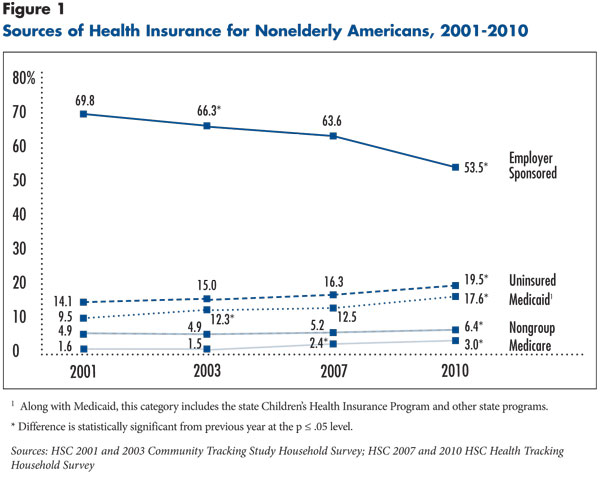 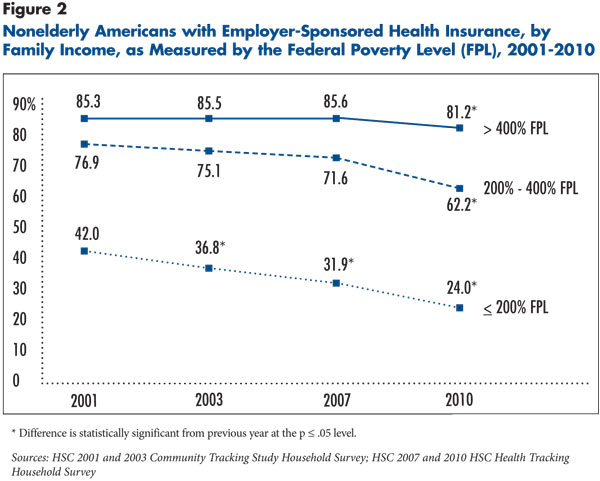 By far the biggest reason for the decline in employer-sponsored insurance between 2007 and 2010 was the massive reduction in employment. Among children and working-age adults:

The reduction in employment explains nearly three-quarters of the decline in employer-sponsored insurance coverage between 2007 and 2010.3

Even among working families, there was a decline between 2007 and 2010 in employer-sponsored insurance enrollment, attributable both to a decline in access and a decline in take up (see Figure 3). The declines in access and take up are easily overshadowed by the massive employment decline, but they are still noteworthy—each factor explains more than 10 percent of the total decline in employer-sponsored insurance between 2007 and 2010. While the trends of declining access and take up continued during the recession, they, notably, did not accelerate. 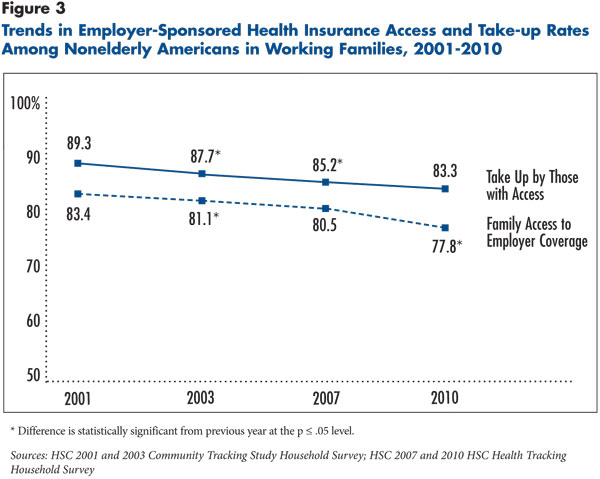 Fraying at the Edges of the Labor Force

Among young adults aged 18 to 27, the share in a working family dropped from 70 percent in 2007 to slightly more than 50 percent in 2010, and the share enrolled in employer-sponsored insurance dropped from 43 percent to 31 percent. For people in families headed by someone with a high school education or less, the share in working families dropped by 16 percentage points to just more than half, and the share with employer coverage declined from 47 percent to 36 percent between 2007 and 2010. Families headed by people with a college degree experienced smaller declines in both employment and employer-sponsored insurance. Families at the edge of the labor force were most susceptible to losing health insurance because of long-term cost trends and were most likely to lose jobs during the recession.

Among working families, only those employed by small firms—fewer than 100 workers—experienced a statistically significant decline between 2007 and 2010 in employer health coverage, from 51 percent to 45 percent. Declines in both the offer rate and the take-up rate contributed to the overall decline in coverage for workers in small firms.

The recent experience with employer-sponsored health insurance could be viewed as an acute illness aggravating a chronic condition. The acute illness—the sluggish economy and weak employment situation—likely will resolve at some point. But the underlying chronic condition—rising health care costs—likely will persist. Rising health care costs help explain why employers have become less and less likely to offer employer-sponsored coverage as a fringe benefit. Rising costs also have prompted employers to require workers to contribute a larger share of premiums and shoulder increased patient cost sharing at the point of service through higher deductibles, coinsurance and copayments.5 If health care cost increases continue to outpace wage increases, more workers are likely to conclude that health coverage is not worth the cost.

Between 2007 and 2010, many people who lost employer coverage, especially children, obtained public health coverage, primarily through Medicaid and the state Children’s Health Insurance Program.6 There has been vigorous debate about the effects of national health reform on employer-sponsored insurance. The best estimates project that health reform will have little net impact, but estimates vary widely. The debate, however, often misses a key point—employer-sponsored insurance is likely to continue to erode with or without health reform, especially among lower-income families and those employed by small firms. The health reform law specifically targets the people—young adults, low-wage workers and those employed by small firms—who are falling out of employer-sponsored insurance and provides an alternative place for them to get health coverage.

For example, in 2010, the law extended dependent coverage for adult children up to age 26 in all individual and group health policies. And, starting in 2014, the law also expands Medicaid eligibility to all Americans with incomes up to 138 percent of poverty and establishes state health insurance exchanges to help small firms and lower-middle-income families obtain more-affordable coverage. People with incomes below 400 percent of poverty will be eligible for federal premium subsidies to help pay for insurance purchased through exchanges.

Perhaps more central to the long-term future of employer-sponsored insurance is whether the health care delivery and payment system reforms, which are other important components of health reform, succeed in slowing the growth of health care costs and health insurance premiums faced by employers and employees.

4. Job quality was defined in terms of the likelihood that a full-time employee will be offered health insurance benefits. To define high-, medium- and low-quality jobs, samples of full-time workers from the 2000-01, 2003 and 2007 surveys were used to estimate a regression estimating the likelihood of having access to employer insurance. Explanatory variables included interactions between the employer’s industry and firm size and union membership, and variables indicating whether the employer was a federal, state or local government. Observations from 2010 were excluded because the recession may have significantly altered the estimated relationships. Jobs were classified as high, medium or low quality based on terciles of predicted values. Job quality was then assigned to each family member in working families based on the highest quality job associated with family workers.

This Research Brief presents findings from the HSC 2007 and 2010 Health Tracking Household Surveys and the 2000-01 and 2003 Community Tracking Household Surveys. All four telephone surveys used nationally representative samples of the civilian noninstitutionalized population. For the first time, the 2010 survey included a cell phone sample because of declining percentages of households with landline phones. Sample sizes included 51,676 nonelderly people for the 2000-01 survey, 39,262 for the 2003 survey, 14,536 for the 2007 survey and 13,595 for the 2010 survey. Response rates for the surveys were 59 percent in 2000-01, 57 percent in 2003, 43 percent in 2007, and 46 and 29 percent, respectively, for the landline and cell phone samples in the 2010 survey. Population weights adjust for probability of selection and differences in nonresponse based on age, sex, race/ethnicity and education. The weights also adjust for the increased probability of selection in cases of households using both landline and cell phones. Although all four surveys are nationally representative, the 2000-01 and 2003 samples were largely clustered in 60 representative communities, while the 2007 and 2010 surveys were based on a random sample of the nation. Standard errors account for the complex sample design of the surveys. Questionnaire design and survey administration were similar across the four surveys. 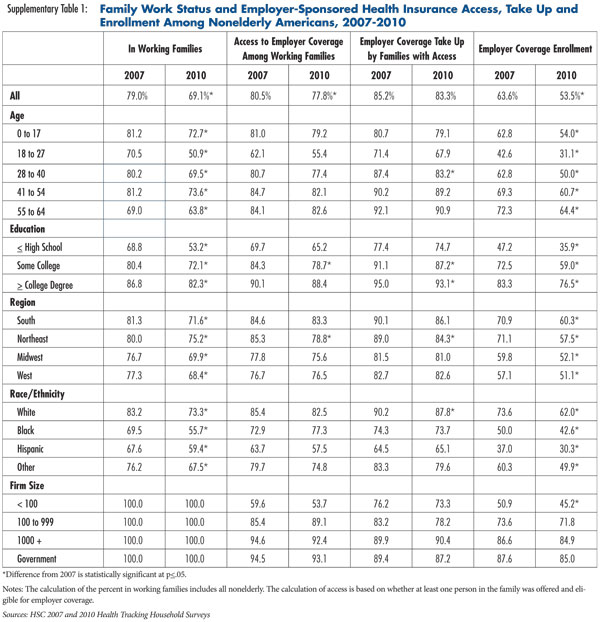