lThe ACA expands health insurance coverage through expansion of the Medicaid program and financial assistance to help individuals purchase coverage through the health insurance marketplaces. In 2012, the Supreme Court ruled that the Medicaid expansion provision of the ACA was optional for states; 31 states and the District of Columbia have adopted the expansion as of February 2016.[6] Medicaid expansion allows states to cover adults below 138% of the federal poverty level (FPL) with an enhanced federal match rate.[7] Michigan adopted the ACA’s Medicaid expansion and launched the Healthy Michigan Plan on April 1, 2014. Similar to other states, the Healthy Michigan Plan covers many low-income parents and childless adults who were not eligible for Medicaid before the launch of the program.

The health insurance marketplace is a program that allows consumers to shop for private coverage and compare available plans offered by different insurers. Through its state-federal partnership with the U.S. Department of Health and Human Services (HHS), Michigan is one of 37 states that uses the federal marketplace (healthcare.gov). Financial assistance is available to consumers who have incomes between 100 and 400% of the FPL and are not eligible for Medicaid or affordable employer-based coverage.[8] Since Michigan expanded Medicaid, the income range for financial assistance is effectively 138 to 400% of the FPL. Assistance is available in the form of tax credits to lower premium costs and cost-sharing reductions (to those below 250% of the FPL), to lower deductibles, co-pays, and other out-of-pocket costs.

Medicaid and the Healthy Michigan Plan 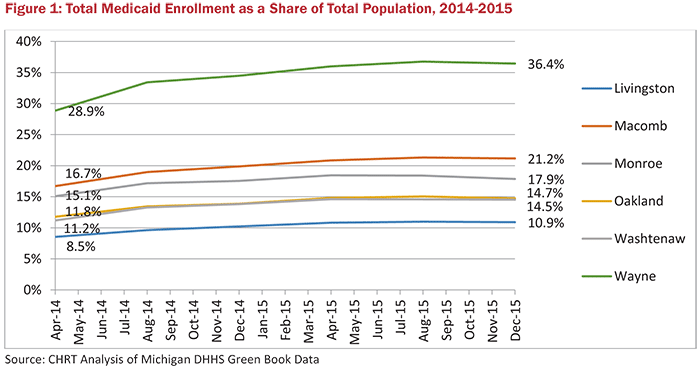 October 1, 2013 marked the beginning of the first open enrollment period on the health insurance marketplace, which ended on March 31, 2014. During this initial open enrollment period, more than 272,000 Michigan residents selected a health plan that provided coverage as early as January 1, 2014. In 2015, the number of plan selections increased to more than 341,000.[9] In southeast Michigan, the number of plan selections increased from about 141,000 to 164,000. Each county in the region experienced growth in the number of people selecting marketplace coverage from 2014 to 2015, but growth was uneven. For example, the number of those who selected a plan grew by 27% in Oakland County but was virtually unchanged in Wayne County. Livingston, Macomb, Oakland, and Washtenaw counties had marketplace enrollment rates above the state average in 2015, while Monroe and Wayne counties had below average enrollment rates (Figure 2). 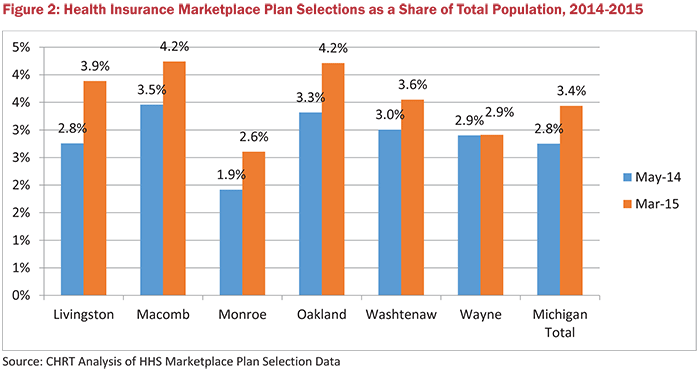 The uninsured population in southeast Michigan declined from about 500,000 in 2013 to 384,000 in 2014 with the launch of the financial assistance through the health insurance marketplace in January 2014 and the Healthy Michigan Plan in April 2014. All counties in southeast Michigan experienced a decrease in their uninsured population, but the sharpest decline was in Wayne County where the uninsured rate fell from 16.4% to 12.5% (Figure 3). 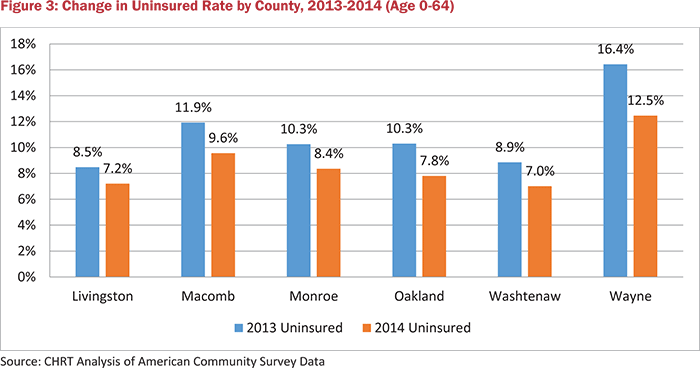 Within the City of Detroit, the uninsured rate fell from 22.5% in 2013 to 17.1% in 2014 (Figure 4). Coinciding with the drop in uninsured, both private and public coverage increased in Detroit. In 2014, 45% of non-elderly residents had public health insurance coverage, primarily through traditional Medicaid, the Healthy Michigan Plan, and CHIP. 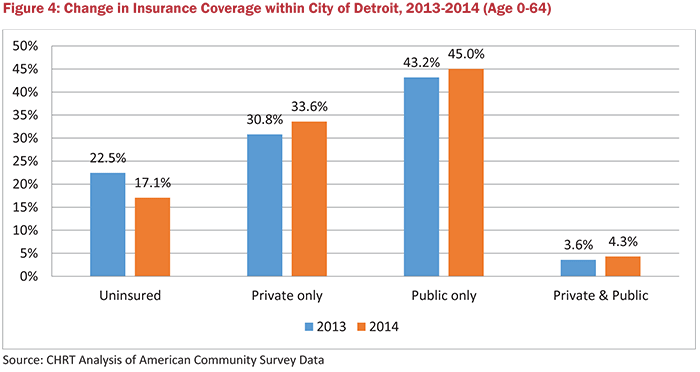 Across southeast Michigan and within Detroit, coverage gains were uneven, with some communities experiencing larger decreases in the uninsured population than others. For example, the uninsured rate in South Central & Southeast Detroit dropped from 21.6 to 12.1% (identified as PUMA 03211 in Figure 5). However, areas of Oakland, Macomb, Wayne, and Washtenaw counties experienced more moderate reductions in their uninsured rates. Full details are available in Appendix Table 2. 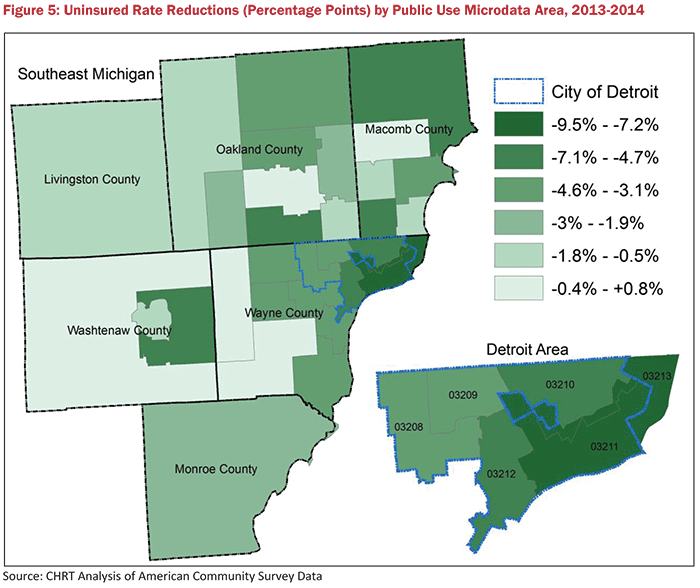 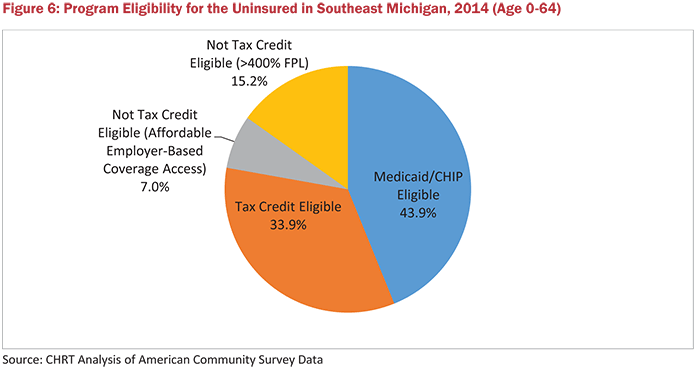 The first year of the ACA’s coverage expansion has resulted in a significant decrease in the number of uninsured residents in southeast Michigan. However, coverage gains have been uneven and a substantial number of residents remained uninsured in 2014. While enrollment in Medicaid and the health insurance marketplace has grown over the first two years of their implementation, a sizable number of uninsured are likely eligible for one program or the other. As implementation of the coverage expansion continues, it will be important to monitor the coverage gains in southeast Michigan and the disparities that may continue to exist.

This brief relied on both administrative and survey data to measure the changes in coverage in Michigan. Medicaid enrollment analysis was conducted using data from the Michigan Department of Health and Human Services.[10] Green Book, which provides monthly county-level enrollment data for Medicaid and the Healthy Michigan Plan.[11] Data on health insurance marketplace enrollment was available from the U.S. Department of Health and Human Services at the ZIP code level,[1] which we converted to the county-level using crosswalks from the Missouri Census Data Center.[12]

To calculate changes in the uninsured population and those with coverage, we used the Census Bureau’s American Community Survey (ACS), which asks respondents about their health insurance coverage at the time they are answering the survey. The ACS includes sub-state level regions known as Public Use Microdata Areas (PUMAs), which we used to examine regional variation in coverage gains in southeast Michigan. Since the ACS is administered throughout the year, some low-income uninsured respondents who answered the survey before April 1, 2014 eventually became eligible for the Healthy Michigan Plan. Therefore, the ACS likely underestimated the coverage gains in Michigan in 2014. 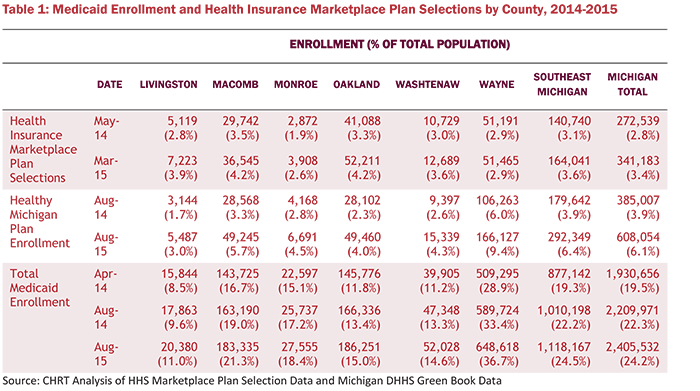 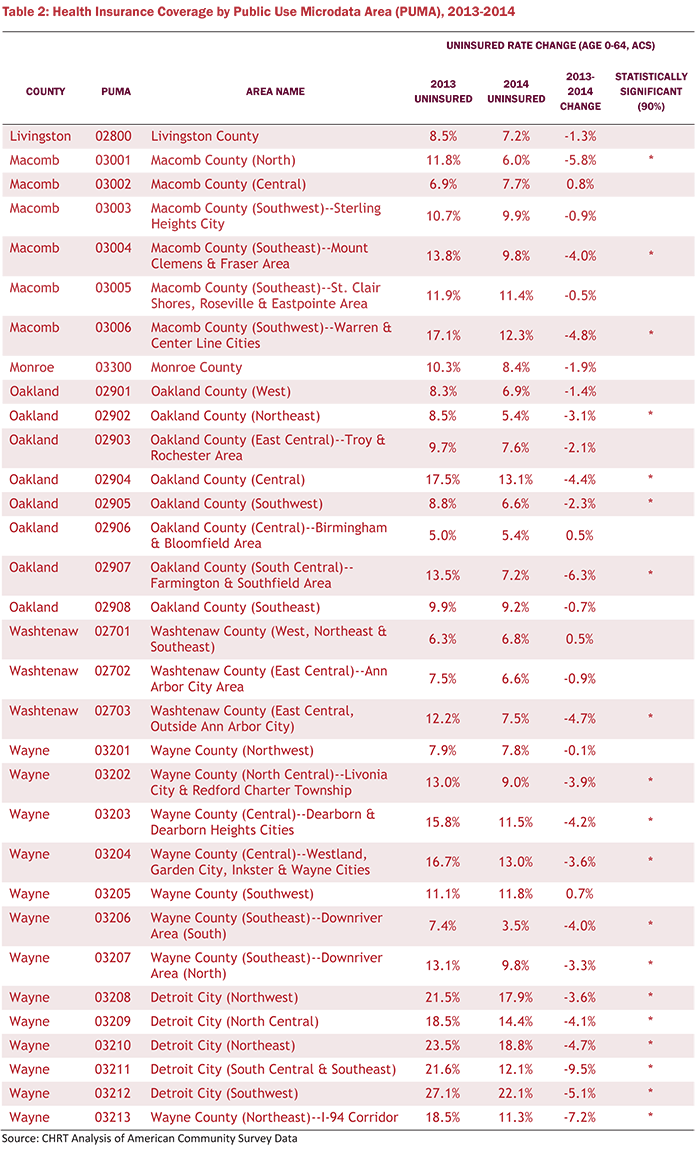